" Dale Mommy Misses You So Very Much"

When I first brought Chip and Dale home it always seemed Dale wanted to be on my lap, when I tried to pick Chip up he liked it, but would squrim around like he was saying. Put me down.  It took me awhile to learn to read these two little boys, but really what Dale was doing was telling Chip to get down. Dale ran the show. Both of my boys were amazing but for some reason, Dale really stoled my heart. Maybe because he always wanted to be with me. It didn't matter how many times I left the room, or how long I had to lay around with my bad back. He was always wanting to be on Mommy,s  lap or side or just as I would look around thinking he wasn't there. There he was, sometimes almost looking like he was caught again!! I can still see him crouched down on the floor behind me with his little eyes peeking out from his paws, like he thought maybe I didn't see him. Maybe he was even embarressed himself at just how much he had to follow me. I loved it!!!

I don't think I could tell you a story about any of my Shih Tzu's and the story would be the same. They all have such individual personalities. And Dale was no exception. When ever Dale greeted me at the door he would jump up and nibble on my ear. I remember the first time he did this, I guess I must of giggled so much that he knew that was a way to mommys heart. He always continued to greet me in this way.

Each and every night Dale and Chip and Now LuLu would get their bedtime treats and still today all my guys still get their treats. The 8 in the upstairs beds with us and the ones that sleep in their crates at night.

They always get one bacon bit and one Rolo. The other dogs would gobble theirs down, but not Dale, he waited till the other dogs had finished every bit of their  threat and were now looking at him for his.

No he would just sit there upright and would hold his treat in his paws just like a little raccoon and nibble each and every little bite. Prolonging the suffering of the other dogs. One night and only one night this ever happened, but Chip Pretended he heard something outside and jumped from our bed to go to the window.

Dale fell for it , Once and Only once.

I have so many memories  of this wonderful little dog, that I called my little monkey. He didn't have that round Champion Face and close nose that I have grown to love in a Shih Tzu, but he did have a face that I loved with all my heart and soul. His little mind and heart was bigger than many a human could dare hope to have.

When I gave up that big beautiful house in Ontario to move into this forever fixer upper in the country. I did that because I wanted them to be happy. I wanted them to be safe. I wanted them to be able to play in their own yard without worry. To just be happy .   I wanted to smile when I watched them play. And in Ontario I found that this was almost impossible. There was always something turning me into a crazy woman worried that they might either get hit by a car , or stolen or hurt themselves.

Well moving here with 100 Acres to play and roam in has not changed me. People still get a bit too close to my driveway and I have even had one of my little guys stolen.  When people ask where I live and I am giving directions I just say if you get lost just ask for the crazy woman with the Shih Tzus.  Yes and there is absoutly nothing I can do about it.  That is what happens when your children are your life.

Dale died the 2nd year we moved here. I will never know and neither could the Vets find out, what ever happened for him to die at only 9 years old.

I do know that he must have known. Dale has always slept in the curve of my legs that was his spot, But about a month before he passed away he gave that spot to his son Freddie. I was  hurt, I didn't understand. Oh I love Freddie, but Dale he was my main man.

He let Freddie sleep in his spot for about a week. Then he took his place back. He must of known how hurt I was. And Maybe he was letting Freddie know that it would be ok to take his place when he is gone.  My mother in law passed away within a week of Dales death, so my only explanation as to why this healthy little boy suddenly got sick was so he could be with Kathleen to bring her the joy and happiness that he has brought to my life. So he could give her all the comfort and hugs and kisses he gave me.

Chip is still here with us, he has just turned 13 years old. And he still sleeps in my bed and rolls around looking for hugs and kisses now without worry about being told to get down or move over. He is just as spry now as he was as a puppy, I might be stretching things a bit, but he is in top shape even though he can't see as good as he once did. He still loves his car rides and still knows what I am doing before I even do. And talk , that is the first thing Chip learned to do, and when he wants something there is no stopping him from talking to you till he gets it.

Dogs are amazing creatures and sometimes these little creatures know exactly what to do when we don't.

Dale on my lap and Chip at GrandMas. 2nd Photo Dale and Chip 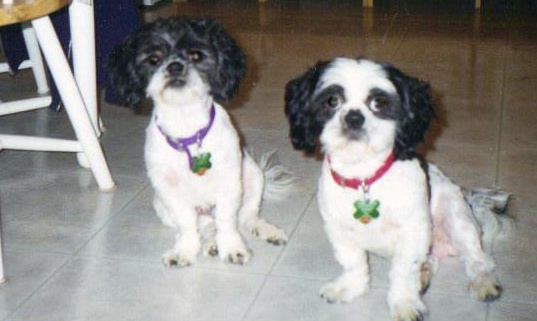 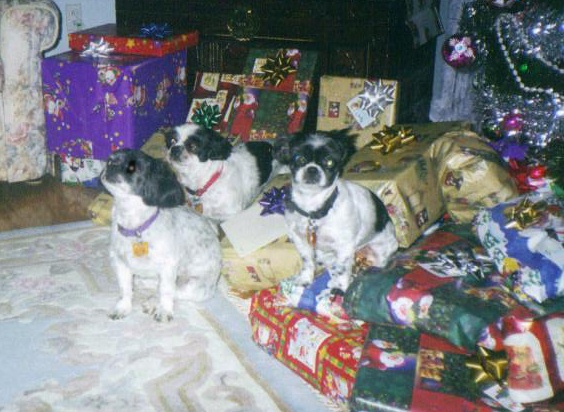 Click on the little button and play my song to Dale.

By Chris Cummings/ Somewhere inside